THE WHISKY A GO-GO PRESENTS: A DAY FOR CHARLOTTE – A BENEFIT FOR CHILDHOOD LEUKEMIA AWARENESS 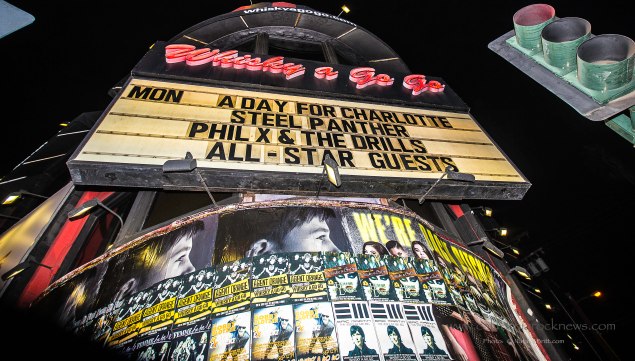 On May 26, 2015 at 18 months of age, Charlotte was diagnosed with leukemia.  On May 27, 2015 a bone marrow biopsy confirmed that the type of leukemia is Acute Lymphoblastic Leukemia (ALL), the most curable form of childhood leukemia.

Unfortunately, after Charlotte’s discharge from hospital, all of the medications required for the 2.5 year treatment plan necessary for her full recovery are not covered by OHIP.

Monday, August 17th was a night to remember for all who attended the world famous Whisky A Go-Go in West Hollywood, CA to raise funds for a very special little girl called Charlotte.

Phil X (of The Drills and Bon Jovi) organized the event along with his wife Lindy, when they found out that a close friend’s child from Phil’s native Canada had been stricken with the disease.  Explains Phil, “When Charlotte was diagnosed with leukemia we felt that helping this little girl to get the proper care was the right thing to do. People need to know about childhood leukemia. It is devastating for a family.”

Little Charlotte, aged 20 months, has Acute Lymphoblastic Leukemia, the most curable form of childhood leukemia. Unfortunately, all of the medications required for her 2.5 year treatment plan necessary for her full recovery are not covered by OHIP.   Charlotte’s parents Mike and Christy are self-employed, and do not have a drug or income replacement plan.   The cost of Charlotte’s life-saving medications over the next 2.5 years of her treatment plan is $2,000 every month, at a total cost of $60,000, a heavy financial burden for the family.

Upon hearing of this, Phil X called upon his Hollywood friends to organize a benefit concert. The night of rock was hosted by actor/ director Greg Grunberg (Heros/ Star Wars: The Force Awakens) and began at 7PM sharp with punk rockers Barb Wire Dolls, who played a 25 minute set with their colorful and theatrical singer Isis Queen dominating the stage dressed in a retro-punk schoolgirl outfit.

Originally hailing from Greece, Barb Wire Dolls was formed in 2010 and recently held a Monday night summer residency at the Whisky.  Their popularity was attested to by the fact that many of their residency fans showed up to pack the front rows, paying a $35 charitable donation to get in despite the fact that the group plays a free show here weekly.

The Barb Wire Dolls line up currently consists of Isis Queen on vocals, Pyn Doll on guitars, bassist JayJay Doll, and drummer Krash Doll.  The band have been hailed by the press as “a unique mix of Blondie, Nirvana, and U2,” and judging by the cheers at the end of their colorful and creative set, they certainly delivered all that was promised.

Next on the bill was Richie Kotzen, who played a surprisingly mature blues-rock set with his three piece band. Kotzen has always dazzled as a guitarist, and tonight was no exception.   Kotzen’s influences of Jimi Hendrix and Stevie Ray Vaughan are abundantly evident in his masterful playing style, which is an eclectic mix of rock, blues, jazz, fusion, and soul. He was joined mid-set by bass legend Billy Sheehan, who is currently touring with Kotzen in The Winery Dogs.

Phil X and the Drills were up next. Phil X currently plays to sold-out stadiums worldwide with Bon Jovi, more than adequately filling the absent Richie Sambora‘s shoes, but as an original artist he really comes alive.  Phil is most widely known for his internet guitar review show Fretted Americana, where he demos some of the most sought-after and rare vintage guitars in the world, currently standing at 450 episodes and over 47 million views.   Although he favors ESP Vipers, Phil’s penchant for semi-destroyed and heavily modified guitars was evident in the stripped-paint finish on his ‘fugly’ blue Framus (who currently endorses him), which he used throughout most of the set.

One of the standout jams of The Drills set was ‘Funk #49‘ by the James Gang, with Rudy Sarzo guesting on bass and Brian Tichy (Dead Daisies/ Moby Dicks/ Foreigner) on drums.  Sarzo proved to be a great match for X‘s trademark onstage exuberant energy and technical skill, while Tichy held down a solid backing with a lot of flair that earned the jam the loudest applause of the night. Also enjoyable was the performance of ‘Troublemaker,‘ a Drills original from the band’s latest album, with a funk-rock sound and a seriously heavy bass groove.

Sunset Strip legends Steel Panther headlined the set with the unenviable starting time of 10:40PM, but the crowd soon got a second wind as the band launched into Panther originals such as ‘Party Like Tomorrow is the End of the World‘ and ‘Just Like Tiger Woods.’  Just two weeks hence, Panther closed down the Hollywood House of Blues (literally), playing the venue’s very last show before the club will be torn down next month and turned into a mixed-use lot of high rise hotel and executive condos.

Perhaps feeling the sting of reality nipping on their zebra-print heels, the glam-metal parody band played one of the most energetic sets they’ve been seen to play in a while.  Their rare small-stage performance was made all the more enjoyable by the fact that the band is now headlining stadiums, touring with top-tier acts such as Def Leppard and Motley Crue and selling out arenas nationwide.   Their 60-minute set was a throwback to simpler times, their new-found fame apparently still a novelty to lead singer Ralph Saenz, whose joy at the fact that a crowd of non-Panther fans still managed to sing every word to the Panther ballad ‘Community Property‘ was visible in his delighted ear-to-ear grin at the end of the song.

Ending the set with one of their biggest hits, ‘Death To All But Metal,’ Steel Panther proved that the band has a heart as well as a sense of humor.  All joking aside, the band is one of the most entertaining and musically accomplished bands to come out of the Strip in recent years, with Saenz proving once and for all that he can out-Dave David Lee Roth with his scarf-flipping, high-note-nailing, mike-stand-twirling antics.  To his left, ace guitarist Russ Parrish (previously an instructor at the Guitar Institute of Technology in Hollywood) effortlessly matched his pace, switching from Bon Jovi to Slipknot to Van Halen, all on the same tiger-striped Kramer guitar and sometimes all in the same verse.

They don’t come more entertaining than Steel Panther, and after seeing tonight’s performance, the band’s sovereignty in the recently re-popularized world of glam rock is assured for many years to come.

The evening ended with an auction, with a signed Steel Panther guitar, a Phil X signed Evil Robot amp, and many other artist-donated items raffled off. There was also an online auction, with signed guitars and drumheads donated by stars such as Def Leppard, Bon Jovi and 5 Finger Death Punch.  The auction raised $12,854.00 on the night for Charlotte’s leukemia treatment.  Overall it was fun night with a great feeling of rock brotherhood and shared community spirit, and for a very worthy cause.

You can contribute to little Charlotte’s recovery fund by visiting www.gofundme.com/weecharlotte 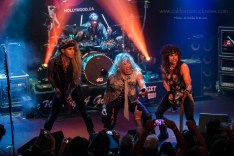 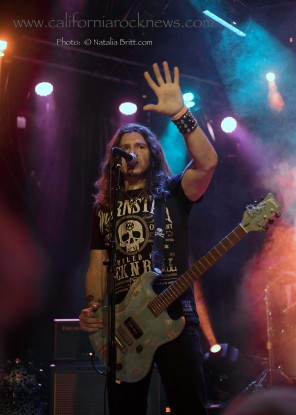 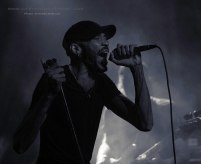 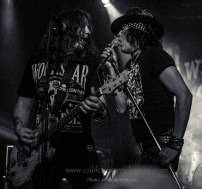 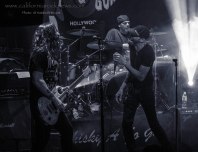 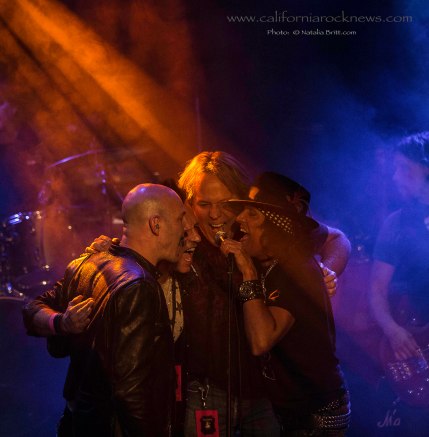 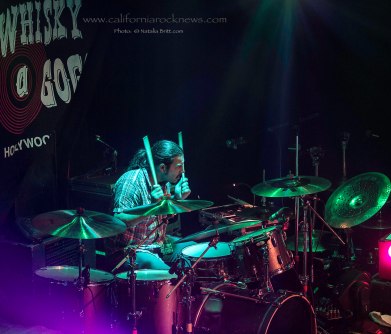 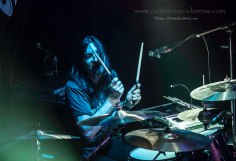 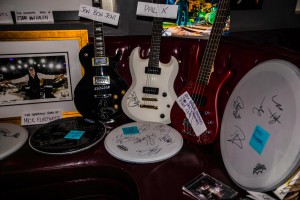 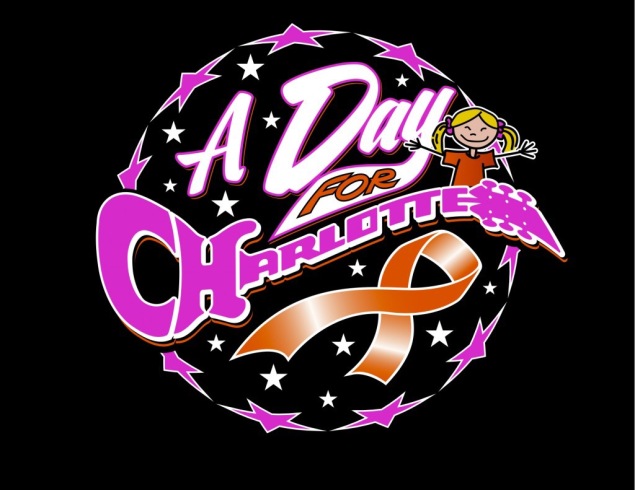