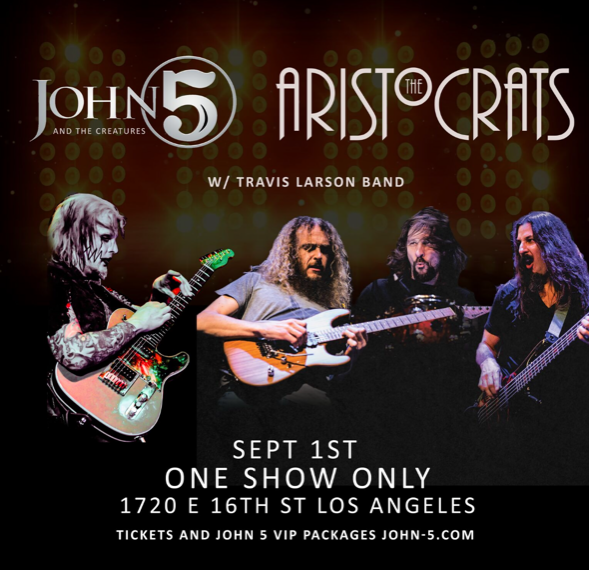 JOHN 5 and the Creatures – comprised of world-renowned guitarist JOHN 5, bassist Ian Ross and drummer Logan Miles Nix – and The Aristocrats (guitarist Guthrie Govan, bassist Bryan Beller and drummer Marco Minnemann) will team up to co-headline an amazing night of instrumental euphoria on Sunday, September 1 at 1720 in Los Angeles. The show will be the first JOHN 5 performance following the July 31release of the anxiously awaited new album, Invasion.

“JOHN 5 and The Aristocrats – It doesn’t get much better than that,” John 5 says. “It’s one show only and you’re not going to want to miss it. It’s going to be a very exciting night, and definitely one to remember.”
Tickets are available now via www.etix.com/ticket/p/5271486/john-5the-aristocrats–los-angeles-1720. Special VIP Packages will also be available for JOHN 5 through the JOHN 5 webstore at www.john-5.com/store.
Says The Aristocrats, “We always say that anything can happen onstage at an Aristocrats show – and that goes double for a JOHN 5/Aristocratsdouble bill! We’re psyched because The Aristocrats and JOHN 5 are obviously coming at the instrumental rock thing from just completely different angles, and neither one of us is playing it straight down the middle. Should be a fun night for anyone in L.A. who likes their music loud and bent.”
JOHN 5 kicked off the year with the debut video from Invasion, the campy animated “Zoinks!” clip, followed by three equally eccentric videos for “Midnight Mass,” “I Am John 5” and “Crank It – Living with Ghosts.” Invasion was produced and mixed by Barry Pointer (Richie Sambora, Joe Perry, Steve Vai, Jackson Browne). A special edition of Invasion will be available for purchase at the Los Angeles show.
JOHN 5 and The Creatures is:
JOHN 5 – guitars
Ian Ross – bass
Logan Miles Nix – drums
The Aristocrats have established themselves as one of the most musically original, refreshingly irreverent and entertaining instrumental rock-fusion acts on the planet. They are touring to promote their most ambitious and exploratory studio album yet, entitled
You Know What…?
The opening act for the evening will be the popular rock-fusion trio Travis Larson Band.
JOHN 5 online:
www.john-5.com
www.facebook.com/John5official
www.twitter.com/john5guitarist
www.instagram.com/john5official

John 5 and The Creatures to play one-off show with The Aristocrats https://t.co/nNzwb41Thq pic.twitter.com/QOhC8XpKI3