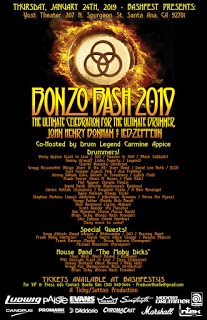 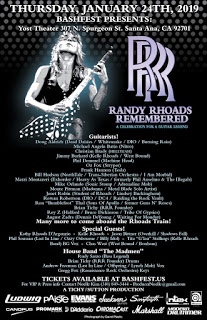 Boasting a line up of almost 100 artists, BashFest 2019 can literally be billed as the biggest show in NAMM time history. Comprised of 2 night, each with 2 hit shows, this year’s BashFest is fondly known as the “Double-Double” with If You Want Bon, You Got It!, Black Mongoose, Randy Rhoads Remembered and Bonzo Bash jamming 4 big shows into 2 jam-packed incredible nights.

Night One takes place on Wednesday, January 23rd with a salute to the legendary Scotsman turned Australian Bon Scott aptly titled “If You Want Bon, You Got It!” followed by all-star jam band Black Mongoose nicknaming the festival’s first night “BonGoose.”

“Bon Scott was one of the best rock frontmen ever! He had a highly distinctive voice that literally sounded like he was exploding from within and peeling paint off the walls with every lyric! He put the power into AC/DC and Bon Scott deserves to have a celebration in his honor! When I first heard AC/DC’s live LP, “If You Want Blood, You Got It” back in the day, I was hooked! I instantly loved Bon Scott’s voice! AC/DC songs are timeless and Bon was an integral part of their ballsy sound and amazing live show! On Jan 23rd, we will celebrate all things Bon Scott to honor his mightiness as best we can! We, the house band The Jailbreakers, are so psyched to play this music we grew up on! And right after we finish, I jump back up on stage with the mighty Doug Aldrich and Francesco DiCosmo and… the ‘Goose is ready to cook! That being our band Black Mongoose! That’s our name and improv is our game! We take some of our favorite songs and rip through them with love, respect and chaos; pushing each other to new territory on our instruments! Plus, we have loads of fun!

I hope to see you all there and start your NAMM weekend with a double whammy of Bon Scott and Black Mongoose! Yeah! BONGOOSE baby!”

In their 10th year together, Brian Tichy & Joe Sutton will present this unprecedented BashFest with 2 nights’ worth of shows in one rockin’ evening of music and madness.

Randy Rhoads Remembered will kick off the night of Thursday, January 24th, 2019 at the Yost Theater, minutes from NAMM with a dazzling array of all-star guitar mastery in honor of the late 6 string virtuoso Randy Rhoads. Returning to celebrate the brilliance of his friend and bandmate Randy is bassist extraordinaire Rudy Sarzo, who shared the stage in both Quiet Riot & Ozzy Osbourne. Rounding out The Madmen’s rhythm section is show founder Brian Tichy on drums. Randy’s brother Kelle Rhoads performs and his sister Kathy Rhoads D’Argenzio shares her stories making this a very touching and personal experience for all involved.

Following RRR is fan favorite Bonzo Bash, created to honor the greatest rock drummer ever, John “Bonzo” Bonham. This is the first of these shows the Tichy / Sutton team produced, with the inaugural event having taken place September 25th, 2010, on the 30th anniversary of Bonham’s passing.

This concept was created by Brian Tichy to celebrate the drummer most consider the greatest in rock n’ roll: John Henry Bonham. They have since taken the show to both US coasts and even to Russia, but BashFest 2019 promises to be the mightiest one yet. The show highlights the industry’s top drummers playing their favorite Led Zeppelin tunes. Each drummer will be accompanied by house band The Moby Dicks. Don’t miss this once in a lifetime opportunity to see NAMM’s 2 biggest show nights.