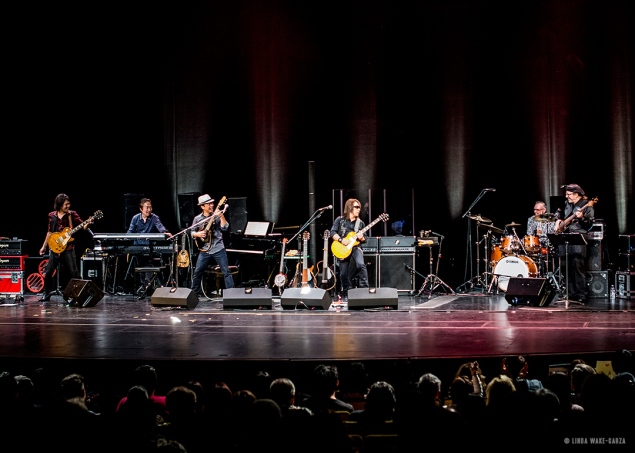 Matsumoto‘s dynamic collaboration with 6-time GRAMMY winner, multi-instrumentalist and producer Daniel Ho features sounds of the island cultures of Japan and Hawaii debuted at #1 in Japan upon its release earlier this year with a sold out 24-show tour through Japan and Tak’s first concert event in Hawaii.
Show review by Tak Ito:

The album channels Ho’s inner rock star and Matsumoto’s love for the relaxing pace of Hawaii. As Ho explains, it features an original collection of contemporary compositions rooted in the artists’ native cultures, “Our album is a musical convergence of our island cultures of Japan and Hawaii. We used traditional instruments like ‘ukulele, slack key guitar, ipu heke, taiko, sanshin, koto (June Kuramoto from the group Hiroshima recorded the koto parts) in our original music.” The almost entirely original, instrumental album sports one song with vocals by Ho, a cover of Journey’s ballad “Faithfully.”

Championed in his homeland as the most renowned guitarist in all of Asia, Tak Matsumoto is best known as songwriter, guitarist and producer of the Japanese rock duo, B’z. Formed in 1988, Matsumoto and vocalist, Koshi Inaba have released chart-topping albums and singles over the course of their career, and hold the record of 49 consecutive #1 single debuts on Japan’s Oricon Singles Chart. With sales totaling over 80-million units in Japan alone, B’z is recognized as the best-selling music act in Japanese history.
Complementing their storied musical success, B’z is celebrated for their dynamic live shows. In 2011, their sold-out North American tour culminated in an unforgettable performance with rock band, Linkin Park, to raise money for victims of the Great East Japan earthquake and tsunami. Later that same year, they played a sold-out dome tour in Japan, which included three nights at the famed Tokyo Dome with 600,000 fans in attendance.
Matsumoto began his career as a session musician. With exposure to a myriad of musical styles, his unique sound is inspired by elements of jazz, blues, classical, metal, rock, and ska. He released the critically acclaimed instrumental albums, Hana and Dragon From The West, which were heralded for their powerful flowing melodies and evocative imagery.
In 2010, Matsumoto joined forces with jazz guitarist, Larry Carlton, and released the album, Take Your Pick. Drawing upon their vast knowledge and diverse musical backgrounds, Matsumoto and Carlton blended their Eastern and Western guitar styles to create a truly magical album. After a successful tour of Taiwan, Hong Kong and Japan, Take Your Pick won the GRAMMY Award for Best Pop Instrumental Album at the 53rd GRAMMY Awards in February 2011.
Matsumoto’s solo discography has garnered prestigious milestones. Strings Of My Soul was released worldwide in August of 2012. It peaked at #2 on the indie and mainstream Smooth Jazz Charts in the US and stayed on the charts for five months. Matsumoto digitally released an instrumental version of “Live Life,” a single from Strings Of My Soul in January 2013, which went to #8 and spent three months on the BDS Billboard Smooth Jazz Radio Top 30. His 2014 album, New Horizon, and 2016 album, Enigma, both culminated with sold out Japanese tours. Eliciting rave reviews, the tours incorporated spectacular stage sets with visual and lighting techniques that presented instrumental music in a cutting-edge experience.
With B’z embarking on their 30th anniversary celebration in the fall, Tak Matsumoto continues to electrify audiences with his prolific skill set and undeniably signature guitar sound. 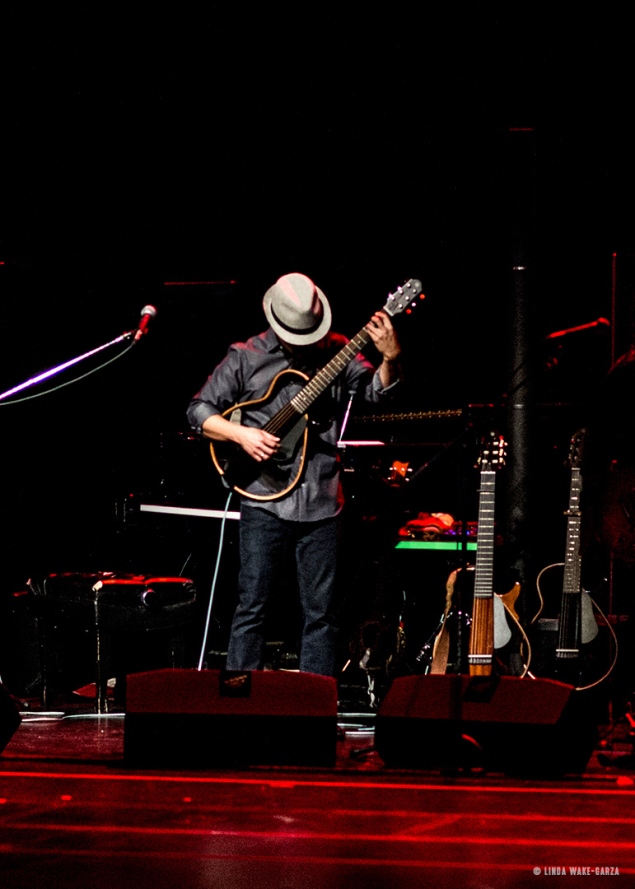 Daniel Ho’s simple philosophy of presenting music with sincerity and artistry encompasses six consecutive GRAMMY Awards, fourteen GRAMMY Nominations, several number-one albums on national airplay charts, and a slew of top-ten albums on Billboard.
Ho’s six GRAMMY Awards (2005-2010) were for Best Hawaiian Music Album as an artist, producer, and engineer. In 2010, his solo ukulele album, Polani (Pure), was the first ukulele album in musical history to receive a GRAMMY nomination. On piano the following year, he received a nomination for Best Pop Instrumental Album for his LP, E Kahe Malie (Flowing Gently). Ho’s 2012 album On A Gentle Island Breeze was nominated for a GRAMMY in the World Music category, and again in 2014, his album Our World In Song with Luis Conté and Wu Man was also nominated for a GRAMMY in the same category.
A Honolulu native, Ho started music lessons at an early age and spent his teenage years orchestrating big band arrangements. At the Grove School of Music in Los Angeles, he excelled in composition and film scoring. He was the leader and keyboardist of the acclaimed ’90s contemporary jazz band, Kilauea.  Ho performs original songs in English and Hawaiian that feature his versatility on ukulele, slack key guitar, and piano. Notable credits include singing Prince’s “Nothing Compares 2 U” in Hawaiian for the end credits of the feature film Forgetting Sarah Marshall (2008), and his widely covered ukulele instrumental anthem, “Pineapple Mango.” As an independent record company owner, he pursues excellence in composition, performance, audio engineering, and production.  Ho’s custom six-string KoAloha ukulele, the D-VI, is currently on exhibit at the GRAMMY Museum.  In addition, he has collaborated with world renowned luthier Pepe Romero Jr. in the design of the Romero Creations Tiny Tenor and XS Soprano ukuleles.

KANSAS TO LAUNCH TOUR IN CELEBRATION OF 50th ANNIVERSARY