JAMES DURBIN of QUIET RIOT Discusses His New Gig with QR, New Project Maps To The Hollywood Scars and More 3/6/2017

MAPS TO THE HOLLYWOOD SCARS

AMERICAN IDOL ﬁnalist James Durbin and QUIET RIOT  guitarist Alex Grossi have announced a collaboration entitled “Maps To THE HOLLYWOOD SCARS” – The ﬁrst 5 song EP was released worldwide via NEW OCEAN MEDIA.  The band is currently putting the ﬁnishing touches on “Maps To The Hollywood Scars – Volume 2” – Set for a spring release, as well as their ﬁrst video, which will be released in the coming weeks.

Durbin and Grossi performed live on the FOX and ABC morning shows as well as in Las Vegas on Wednesday, Feb 22nd,.   Later that evening, they held a free “E.P. Release Party” at “Count’s Vamp’d”.

Recorded at Desert Moon Productions in Las Vegas , (a state of the art studio owned by Danny “The Count” Koker, star and creator of the History Channel’s hit show “Counting Cars”), Maps To The Hollywood Scars showcases the darker side of Hollywood and the music industry – as experienced by 2 people that have taken 2 different paths, yet ultimately found many common themes throughout their respective journeys. The ﬁrst of the two EPs features a guest appearances by longtime GUNS N’ ROSES keyboardist Dizzy Reed, as well as programming and engineering by A.J. St. James (The Big 4, MTV).

In 2011,   James Durbin released the album, titled “Memories Of A Beautiful Disaster” . The album debuted at number 36 on the Billboard 200, at number eight on the Billboard Rock Chart, number 25 on the Digital Album Chart, and sold 28,000 the ﬁrst week,  The album went on to sell over 123,000 copies in the U.S. alone.

Most recently, Durbin released  “Riot On Sunset” in the summer of 2016 available via iTunes  www.jamesdurbinofﬁcial.com. 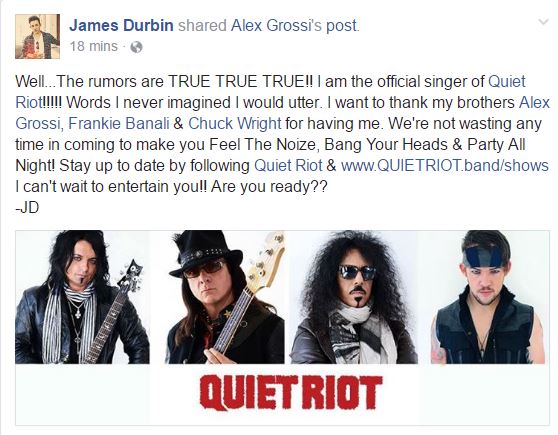 Alex Grossi has been a member of QUIET RIOT for over a decade, having been chosen by the late Kevin DuBrow and Frankie Banali to ﬁll the guitar slot in 2004.  The award winning  QUIET RIOT documentary “Well Now You’re Here, There’s No Way Back”  has been airing on Showtime since January 2015, and appeared at multiple high proﬁle ﬁlm festivals including the 2015 Cannes Film Festival.The movie is currently available via  iTunes and on DVD at www.quietriotmovie.com.