If you still don’t believe that all this hype about The Pretty Reckless indeed is there for a reason, I would highly recommend to go and see them live.

Female-fronted bands are nothing new today, and the number of those is growing each day, but while some of those bands are either just one-hit wonders or simply carried out onto the top by  whatever trend they are following at the moment, The Pretty Reckless definitely made a statement and here to stay for the years to come. 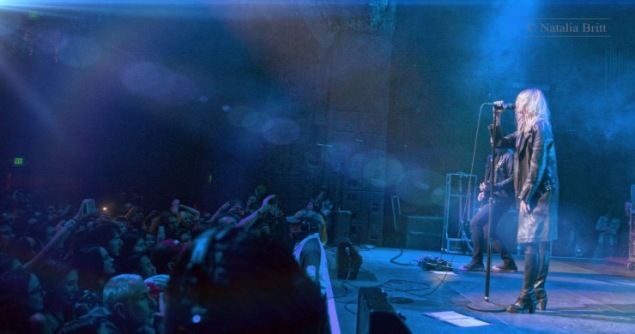 Now, with the three albums down and a busy 2017, we are guaranteed to hear an abundance of some dirty and raw rock’n’roll and have a good time.

Last night The Pretty Reckless wrapped up their U.S. run in support of the new album ‘Who You Selling For’ at the beautiful Los Angeles downtown theater – The Mayan. The whole package, including the opening acts Them Evils and Holy White Hounds definitely rocked. By the time the headliner went on shortly after 10:30 p.m., the audience had already gotten a good portion of funky riffs and stage madness.

As the band took the stage to the sounds of iconic ‘Hells Bells’, kicking off the show with the older material ‘Follow Me Down’ and ‘Since You’re Gone’, followed by ‘Oh My God’ off their new album ‘Who You Selling For,’ and if it was your first time seeing The Pretty Reckless and you were still skeptic about their ability to deliver, you were most likely a fan by the time the third song ended.

To say that Taylor Momsen sure has an interesting stage persona is an understatement. While some of the female fronted bands may take advantage of the situation to heavily rely on the looks of the front woman, Momsen doesn’t seem to care about the numerous outfit changes or blazing makeup. As she shakes her head and drifts off to the bluesy sounds of the guitar and the tenacious drum beats, all she really seems to care about is to deliver vocally, even if it means to strip herself off everything she is hiding behind. At times it’s hard to believe that a fragile frame like hers can still produce such a powerful vocal performance. Whether we are talking about the chops on ‘Sweet Things’ or soothing vocals on the new ‘Who You Selling For’, it’s obvious, Momsen is a rare breed of a front woman who can easily command the mood of the audience without the need of the pyrotechnics or flashy production.

The set, which was a nice combo of the classic material and newer compositions,  definitely displayed all the sides of what the band is truly capable of – whether it’s to pump up the audience to rock out or make the audience dissolve in the bluesy southern drift.

Not many bands are able to combine all those elements and The Pretty Reckless makes that list.

Summing up last night’s performance: if you came to The Mayan last night hoping to hear and see something totally different, you got it. As the band concluded the night with the anthemic ‘Fucked Up World’ and the crowds of happily exhausted and sweaty fans poured outside into the cold December air, it was clear that if some of those people in the audience were the first-timers, they were definitely leaving as fans.

Many bands venture into the dark, but The Pretty Reckless does that with class. Everything from the lyrical content of the songs to the raw energy of the front woman Taylor Momsen makes the band an truly enjoyable act to watch.

But what you really need to know is that The Pretty Reckless once again proves that rock is well and alive and these guys are intended to keep this tradition going.

As the band is heading into a new year with their hands full, I’d highly recommend seeing them live this summer or check out their new album ‘Who You Selling For.’

The Pretty Reckless are: