The Sunset Jam looks to build a community focusing on good musicianship and will welcome all instruments.   The inaugural Sunset Jam will take place Monday, January 11 at 9:00PM.

Led by acclaimed session and touring guitarists Erik Himel and Derek Williams, The Sunset Jam will be hosted each Monday night at The State Social House and invites local and national/international artists to showcase their talents alongside Himel’s professional house band.

Co-sponsored by COLDCOCK Whiskey, all Sunset Jam concerts are free to attend. 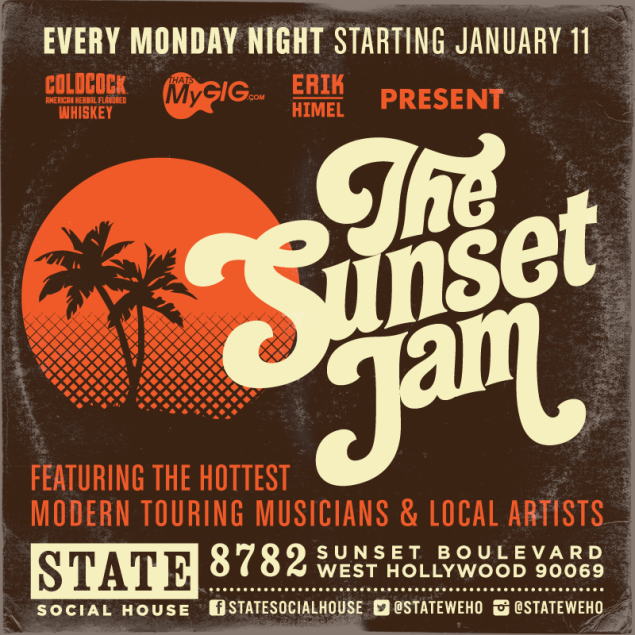 -Selected guest performers will receive show set lists (mostly consisting of pop and rock covers) in order to select the songs on which they play and what gear to bring with them to the venue.

-Artists can also apply to perform their original music as opening sets  prior to the jam sessions.

Those interested in performing should submit a video of their playing via The Sunset Jam’s website for review.

Mark Mackay, a country-influenced artist ranked among Music Connection Magazine’s Top 100 National Live Acts in 2014, will perform as an opening act.   Indie pop songwriter Sarah D is also booked as an opening act for the evening.

Additional guest performers will be announced shortly before the show.

Williams states:  “The Sunset Jam is beneficial for both national and international touring artists and is a great way for musicians passing through Los Angeles to experience a true sense of camaraderie outside of their respective hometowns – to build meaningful relationships with artists from diverse backgrounds.”

UPDATED COVERAGE OF THE SUNSET JAM