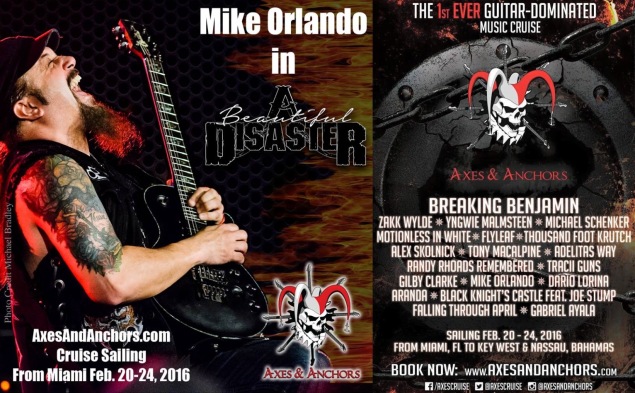 A Beautiful Disaster was formed in late 2014 and is a new breed of rock, combining unforgettable melodies, meaningful lyrics and their own unique blend of masterful songwriting and musicianship, demonstrating that there are still musicians out there that actually prefer to play “real” instruments in the digital age we live in today.   The band will be entering Mike Orlando’s Sonic Stomp Studios to begin recording their debut album which will be engineered, mixed & mastered by Orlando.

Announcement on “That Metal Show” (clip)

“That Metal Show” Full Episode (feat. Mike Orlando as guitarist of the week)

Mike Orlando is the over-the-top guitar phenom, founding member, and songwriter of the internationally successful hard rock band Adrenaline Mob. Within a short amount of time, they landed a #5 hard rock album on Billboard, a #1 metal album on iTunes, and iTunes UK metal album of the year. He has toured the globe numerous times with AMOB, which includes arena runs with Godsmack and Avenged Sevenfold as well as headlining tours, and runs with Halestorm and most recently Drowning Pool.   He is also a successful solo instrumentalist overseas releasing both critically acclaimed albums Sonic Stomp I & II to date. Mike redefines rock guitar, combining lightning speed, passion and beautiful melody all in one package that simply lights up the stage & fretboard like no other in todays music scene. He has been featured on Rock Band, in numerous major worldwide guitar publications and videos, and was tapped for Guitar Player magazine’s Superstar of the Year. He has also been a guest on VH1 Classic’s That Metal Show and has returned this season as the featured guitarist of the week, which aired in the spring of 2015. He has also received his own line of signature products and top endorsements from some of music’s biggest companies.

As owner of his own recording facility, Sonic Stomp Studios, he is also an accomplished producer, mixer, and studio engineer. He has engineered/co-produced all four Adrenaline Mob albums, also mixing/mastering their major releases Coverta, Men Of Honor and Dearly Departed albums, along with many others.

NICK COYLE is an accomplished singer/multi-instumentalist/songwriter who has recorded and performed internationally for over 15 years. His music has been featured on a wide variety of media outlets including ESPN, FOX, NBC, MTV, VH1, HOWARD STERN, SIRIUS, and EA Sports. Over the years he has toured and shared the stage with numerous acts such as Alice In Chains, Volbeat, Nickelback, AFI, Chevelle, Cold, Godsmack, Papa Roach, and many others.   Nick’s previous bands have been signed to Republic/Universal (Lifer) and FOF/EMI (The Drama Club). Lifer’s self-titled LP was produced by rock legend Alex Lifeson.   The album contained the song “Breathless” which was featured on the soundtrack to the Blockbuster film The Scorpion King. Nick received a gold record for this contribution with the album selling over 750,000 copies to date.

Chris Bones is one of Philadelphia’s most sought after session drummers/songwriters.  He was accepted and studied at two prestigious classical and jazz schools which contributed to his diverse musical background which includes playing, composing, and arranging in many different styles such as jazz, orchestral, drum corps. musical theater, and more.   Combining these various styles and techniques with his deep passion for rock music led to the introduction and eventual long time friendship with singer Nick Coyle and bassist Mike Morgan.  They have played in various bands together including The Drama Club.  He has spent the last 15 years honing his craft touring the U.S. and playing shows with popular artists such as Motley Crue, Shinedown, Fuel, Godsmack, Slash & Myles Kennedy, Halestorm, and many others. His infectious grooves and tasteful approach to creating unique drum parts make him a force to be reckoned with among today’s modern drummers.

Mike Morgan has received national recognition as a bassist for his work with The Drama Club and Stardog Champion. Also a long time friend and bandmate of both Nick and Chris, he has also toured and shared the stage with successful acts such as Bon Jovi, Cold, Chevelle, Candlebox, 311 and many others.   He and The Drama Club worked with producer/guitarist Rob Caggiano (Volbeat, Anthrax) on their self titled debut on FOF/EMI.   The lead single “November” was top a 20 song and a staple on Sirius’s Octane channel.