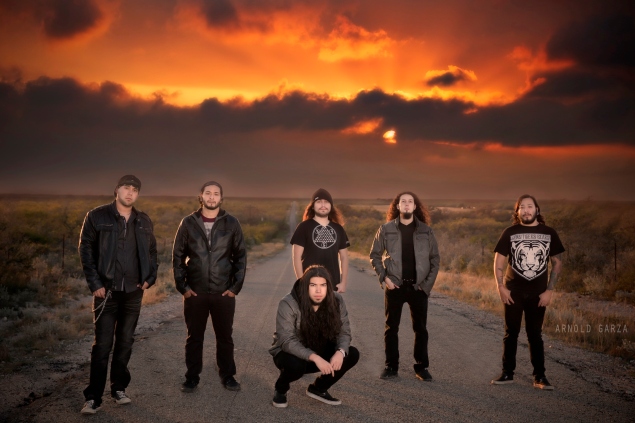 The Texas six-piece band SHATTERED SUN (Twitter, FB) have been conquering new horizons with their debut album Hope Within Hatred on Victory Records.  They performed for a month in early spring, 2015 with thrash legends Testament and Exodus, which also included stops at the 17th annual New England Metal & Hardcore Fest, Welcome to Rockville Festival, as well as the River City Rockfest in San Antonio, where they shared the stage with Anthrax, Papa Roach and other metal contemporaries.  With their summer already booked on the 8th annual Rockstar Energy Drink Mayhem Festival on the Victory Records Stage, SHATTERED SUN are definitely headed in the right direction.

Guitarist Jessie Santos took his time to chat with California Rock News about the band’s recent and upcoming events.

On Touring with Testament and Exodus:

Jessie Santos: It was our fist major US tour and they just brought us under their wing.  We watched them every night and it was amazing seeing Gary (Holt) and Lee (Altus) tearing it up on guitars.   Steve Souza, Jack Gibson, Tom Hunting, also Chuck Billy, Eric Peterson, Alex Skolnick , Steve Di Giorgio, and Gene Hoglan – they are all great guys.  The first week we were pretty nervous, because it was all new to us.  About a week in, we threw a barbeque and kind of broke the ice.   We started getting used to being on the road with them.  We hung out a few times.   It was just a great experience.

At the beginning of the tour, no one knew who we were.   We started out in San Francisco.  That was pretty much untapped territory for Shattered Sun.  It was pretty intimidating at first, but we ended up playing for huge crowds and by the end of tour people recognized us.   It was pretty cool!

J.S.: It was awesome. Even though we played pretty early, it was really cool to be a part of that event.

About getting ready for the Rockstar Energy Drink Mayhem Festival:

J.S.:  We are rehearsing as much as we can before we take off for the road next Monday. I believe we have a radio performance in El Paso.  We are taking off pretty early so that way we can get a head start.  We’re really excited to be getting on this tour.  Playing with Slayer and King Diamond is pretty amazing!  And especially because this is only our second tour and we are really grateful to have this opportunity.

About their upcoming tour with Soulfly, Soilwork and Decapitated:

J.S.: It’s gonna be sick!  We start September 30th and the last day is on Halloween, I think, so it will be a pretty quick run!

On the band’s lyrics, which are much more positive than those of most heavy bands

J.S.: Our singer, Marcos (Leal), writes all the lyrics.  He likes writing things in a positive way to bring a message of hope!   He is not really into writing anything negative.   Not all metal should be branded as evil.   I see a lot of bands singing about that sort of thing. To me, it’s the way of expressing and getting rid of this anger – sort of meditating… getting it all out.  Everyone has it, but we like to keep it positive.

About his ESP guitar:

J.S.: Daniel (Trejo) and I recently got an ESP deal.   We are now endorsed by them, which is sick. by the way.   I will be able to get the E-II series air model (ESP Alexi Laiho Signature) which is like a flying V, but it has a few variations in a body shape. It’s one of the best guitars I’ve owned.  The action is just great, the pick ups are great.  I love the way it feels.