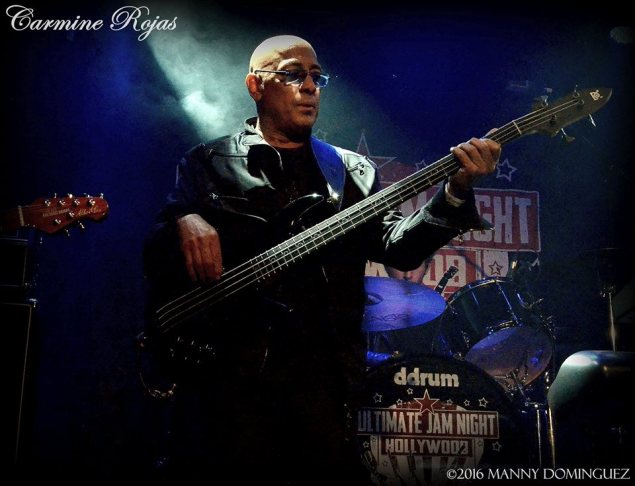 ULTIMATE JAM NIGHT and ZINNA TV  presented “THANK YOU DAVID BOWIE” in celebration of the iconic ‘Thin White Duke’ at The Whisky A GoGo with David Bowie’s bassist Carmine Rojas serving as Musical Director, Bernard Fowler from The Rolling Stones,  Guitarist Gilby Clarke from Guns N Roses, and many more. 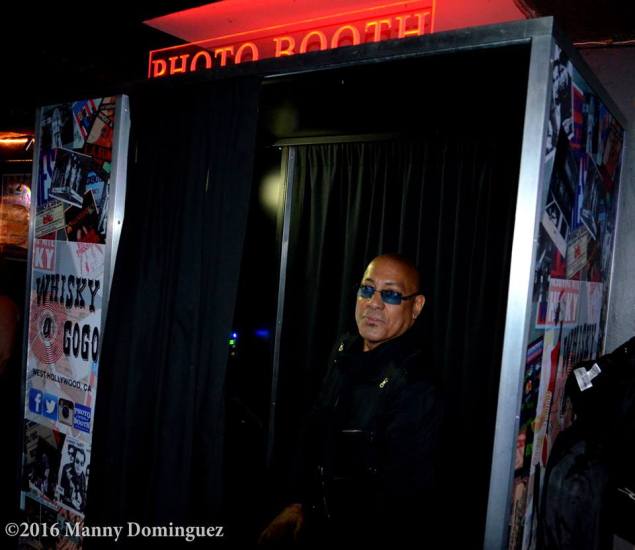 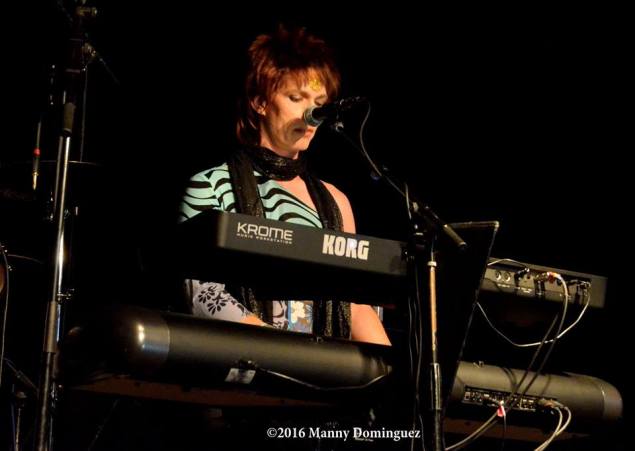 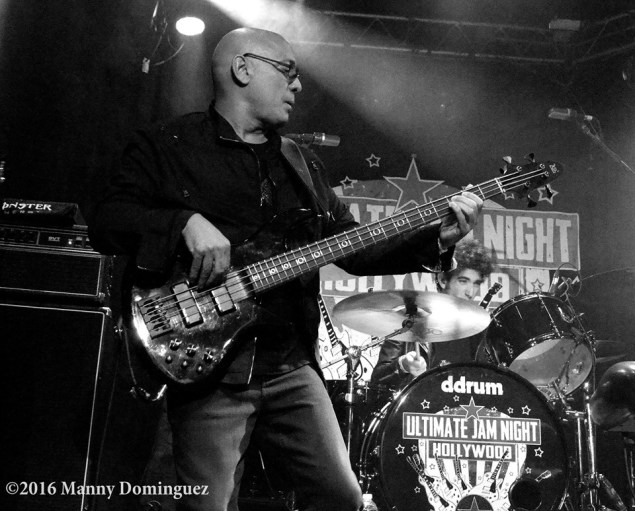 “Bowie wasn’t just a brilliant musician, he was a cultural genius. With an ever changing persona his style and his music influenced generations. spanning a period of over 50 years. ” — UJN

“A Frame” was the first opening act Mike Smith on drums, David Barcai on bass, and Tommy Gibbons on guitar from Phoenix, AZ.  Mild panic set in when Paulie Z did not come out to introduce the band, but UJN staffer Forrest McKinnon did a fine job. 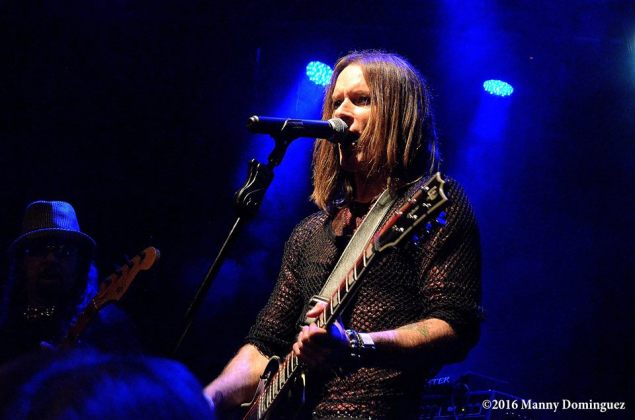 UDR Records and Motorhead Music’s BUDDERSIDE followed their set. Established as one of the true “bands to watch” in 2016 with released singles that have captured attention, They played to 80,000 as part of the famed Wakken Festival with the supremely talented Patrick Stone on vocals and guitar, Rich Sacco on drums, “Stoneman’ Michael Stone on bass, Johnny “Johnny 5” Santoro on guitar.

CHANGES from 1971’s Hunky Dory album was next with Kevin Stevens on drums (Natasha Bedingfield, Wayne Kramer, and Bobby McFerrin) with Johnny Martin on bass (Tracii Guns and Frankie and the Studs) with Derek Holiday and Steve Dawson on guitar, Buster Akrey on keys — an inductee into the Rock and Roll Hall of Fame  Katja Rieckermann (Rod Stewart) on sax, who played with Lady Gaga during this year’s Grammy Award’s Bowie Tribute, Koi Anunta on violins (Adam Lambert) , and the multi-talented Walter Ino on vocals. 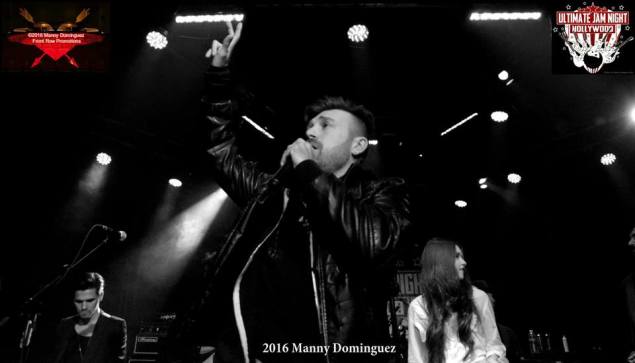 SPACE ODDITY was next with the evenings MD, bassist Carmine Rojas,who was a member of David Bowie’s band from 1983-1987 performing on such hits as “China Girl” , “Let’s Dance”, “Modern Love”, and “Blue Jean” and has also worked with such greats as Rod Stewart, Tina Turner, and Joe Bonamassa. He was joined by Marcus Nand on vocals, with Michael Martinsson on guitar (Dilana), Mike Dupke and Koi Anunta and Emily V on violins

Drummer Christopher Allis (Deana Carter and Denny Laine) to joined with Carmine on the rhythm section for LIFE ON MARS with Steve Dawson on acoustic guitar we bring back CJ Ramone’s Steve Dawson and Bowie impersonator Julian Taylor on keys and vocals. 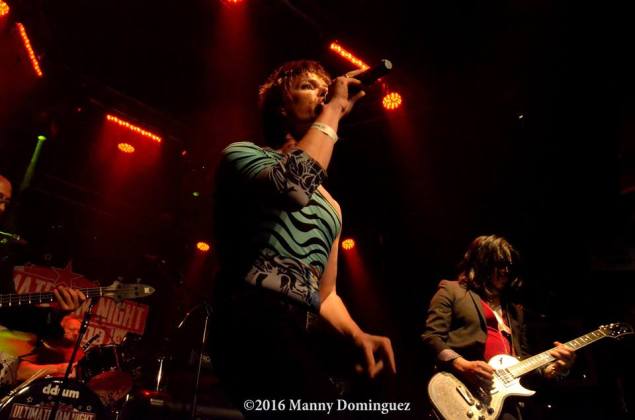 JEAN GENIE was next with Julian Shah Taylor, Kevin Stevens on drums, with Carmine Rojas, Michael Martinsson and Mitch Perry on guitar and Smashmouth’s Michael Klooster on keys. 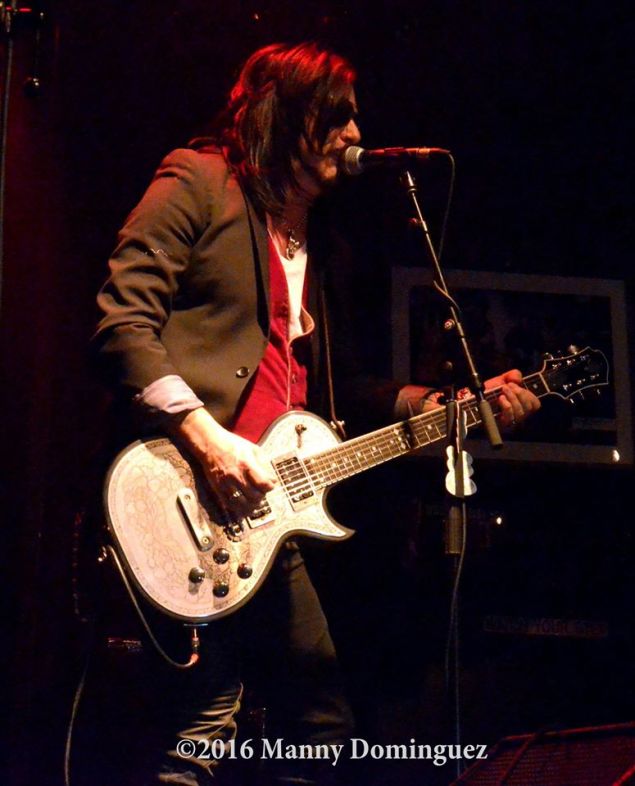 Matt Starr, the Captain Chuck Wright, and Walter Ino joined in with Gilby Clarke back to Layla Allman on DIAMOND DOGS 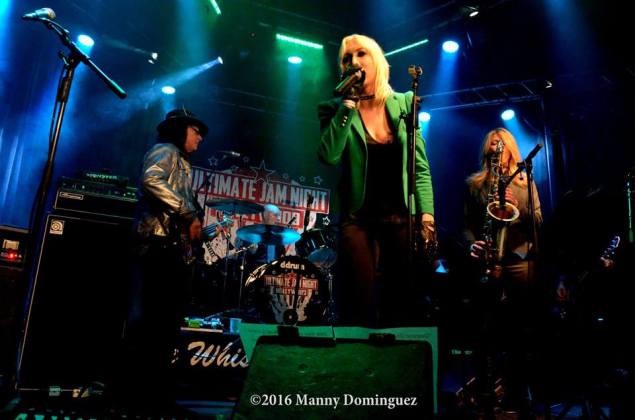 The Rolling Stones’ Bernard Fowler then performed STAY and WIN with Neil Daniels, and Spanish guitar player Gabi Martinez. Anyone that stayed for that clearly won.

UNDER PRESSURE featured Derek and Debby Holiday with Matt Starr on drums, Shane Soloski on bass, Walter Ino on keys and The Sunset Jam’s Erik Himel (Monday’s at The Viper Room) joined by Brent Woods (Sebastian Bach) on guitar. 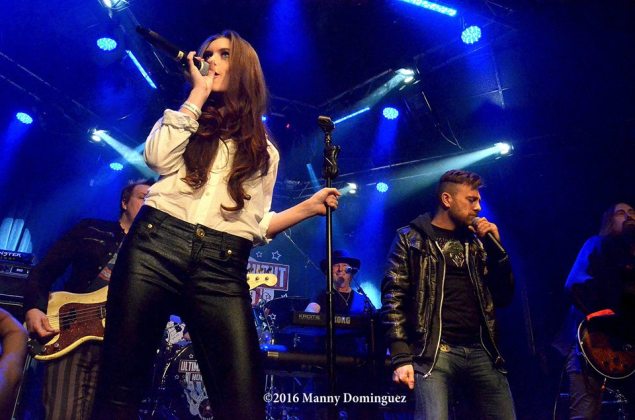 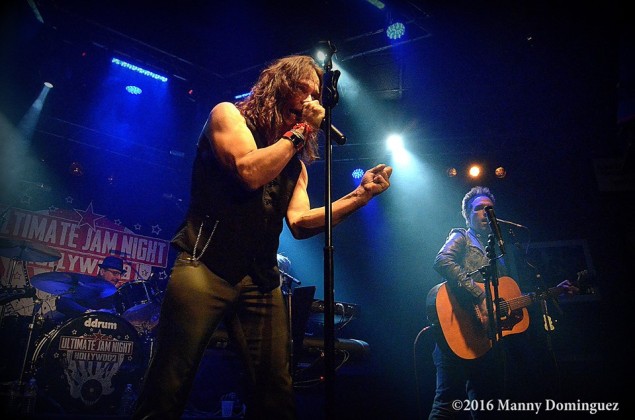 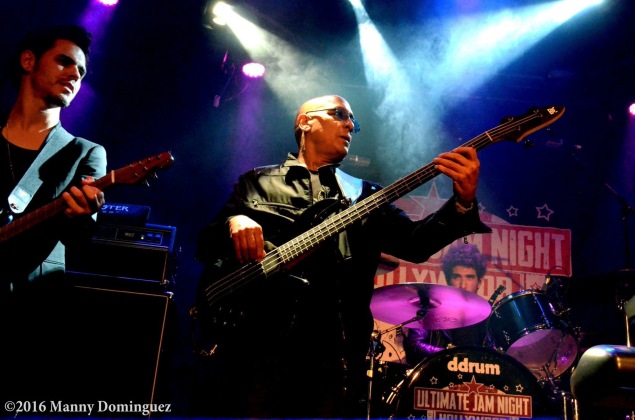 BLUE JEAN —Bassist Carmine Rojas played on this song which was part of Bowie’s album, “Tonight”. With drummer Christopher Allis,  on keys from Sabrina Carpenter, Mathew Jordan with Steve Dawson on guitar and Matthew Mayes on vocals.

YOUNG AMERICANS continued the show with Walter Ino back up on acoustic, and Michael Klooster on keys, Katja Rieckermann on sax, and Tom Rossi on percussion..

FAME was next with Carmine Rojas on bass,Erik Himel from the Sunset Jam and Matt Fuller from Puddle of Mudd with a duet from Amanda Hardy and Derek Holiday…

And the “dancing” continued as Carmine was joined by the amazing Joe Travers on drums with Oliver Leiber and Matt Fuller on guitars, Matthew Jordan on keys, and horn section of Anne King, Daniel Hefferman, Ken Tussing, and Katja Rieckermann, percussionist Tom Rossi, with vocalists Debby Holiday and Eric Dover to finish the show with ‘Dancin’ in the Streets’ .   Thank goodness nobody got hit by a car dancing on Sunset, because that would have caused the ultimate traffic jam. 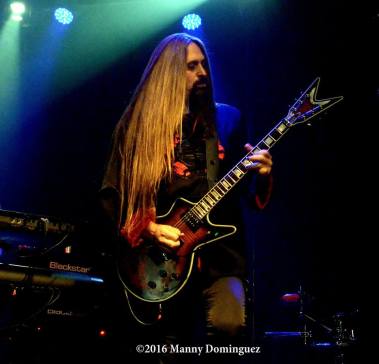 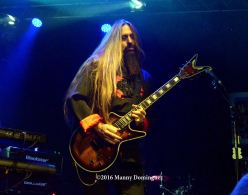 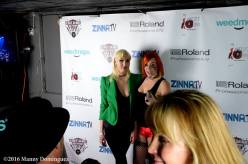 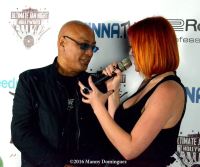 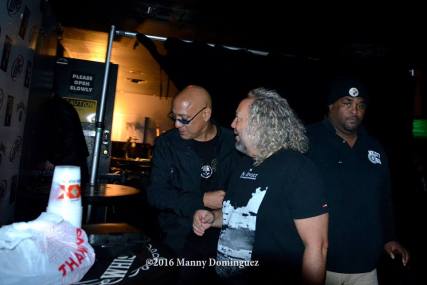 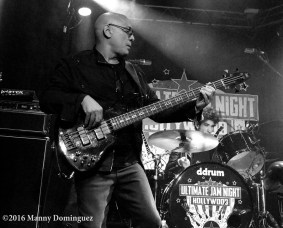 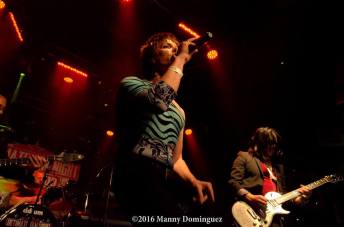 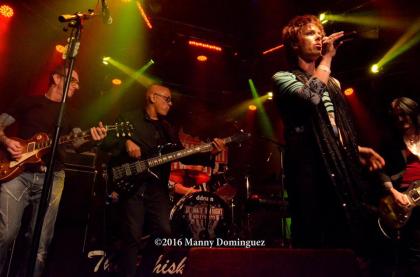 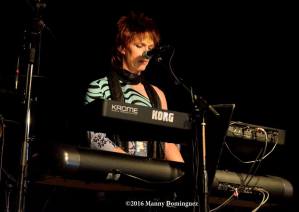 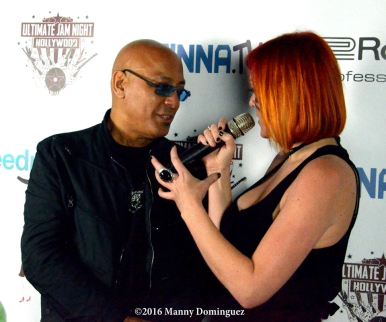 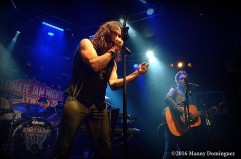 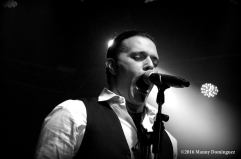 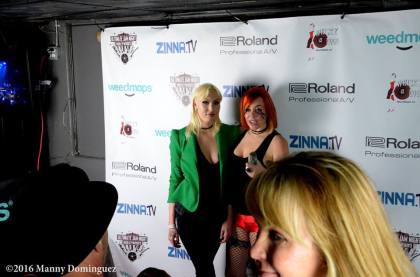 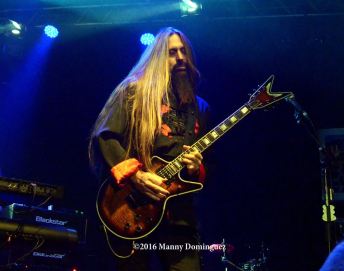 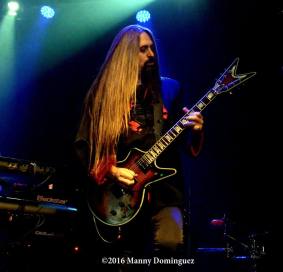 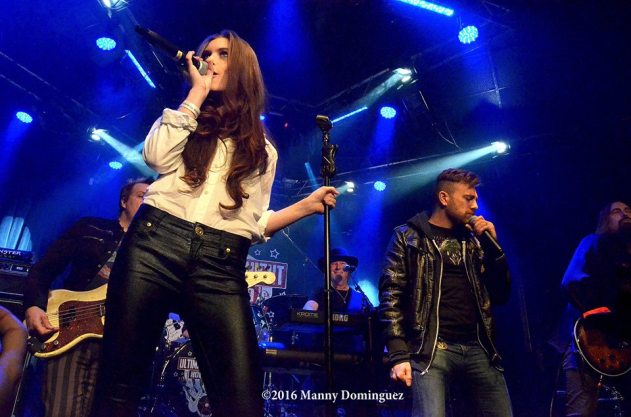 Backstage at Whiskey a Go-Go last night for @ultimate_jam and the Thank You David Bowie Tribute.… https://t.co/EzT1JA4RuQ

The next UJN will be an all-KISS show with Bruce Kulick. 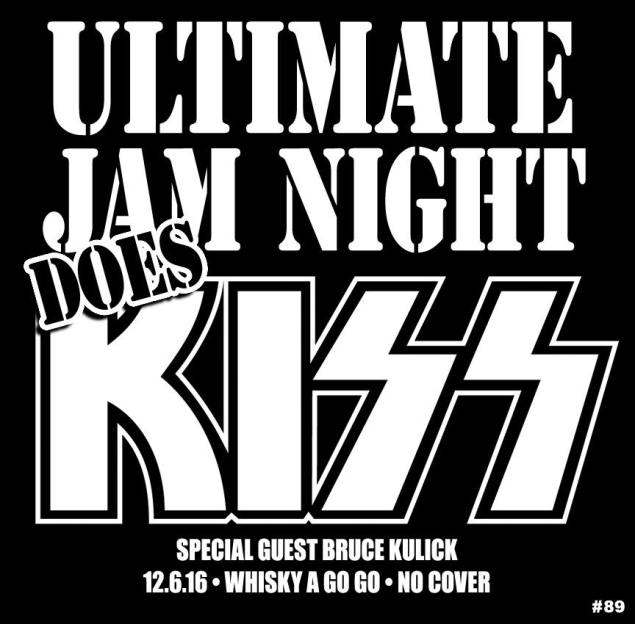