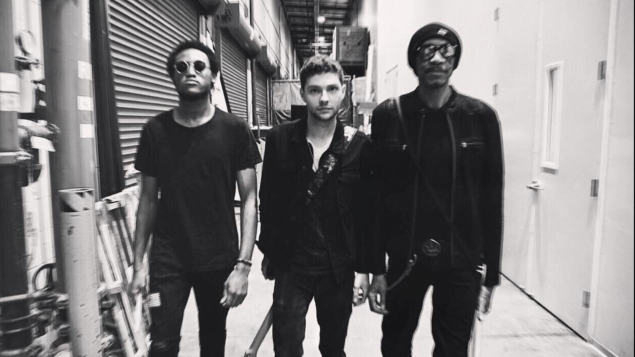 The video for Tommy Baldwin‘s “Save Me” is the first of two this month from the forthcoming release “Phases” on Broken Bottle Records with dUg Pinnick both producing and playing bass along with Baldwin’s longtime drummer, Elijah Pollard.

“The location we shot it at was at the JBL headquarters/Experience Center in LA, as I am one of their artists. We did 2 videos in 10 hours and it was amazing.’

“These releases of the music videos present the cinematography/videography from the guys that do videos for Korn, KXM, Jonathan Davis
Sebastian Paquet. It was also directed by Alison Roberto who directed 13 Reasons Why on Netflix.”

“”dUg Pinnick is playing bass in the videos and on the record as well. He also produced it. My drummer, Elijah Pollard is playing drums on the recordings and in the videos. We met in high school when I was 15 and he was 16. I gave him a demo I had done off GarageBand with 8 or 9 songs on it and he loved it, so I asked him if he wanted to play the songs live at places around town. He played in the jazz band and we ended up forming the Tommy Baldwin Trio. Since then, we’ve never stopped playing together. Elijah is also the reason why I knew who dUg was.”

How He Met dUg Pinnick

“My favorite guitar player, Eric Gales and Elijah’s favorite drummer, Thomas Pridgen had a band called PGP, and dUg was on bass. I had never even heard of KINGS X. So when I went out to NAMM in 2015, I saw Eric and Tomo Fujita do a jam at the Eminence speaker company booth and got there early and everything just so I’d be up front. When they were done, Eric went and sold CDs at a stand at the very back.”

Going from the best spot to the worst made him think he’d never get to meet him, “because I really didn’t want to bother him and be that guy.” As Tommy started walking away, he saw Dug and went over to tell him he “loved his bass playing and his voice and how inspiring it truly was.” The two just immediately connected when dUg said, ‘Well, I’m lookin for some food, you hungry?!’ Then he heard me play and sing at the Tech 21 booth and that’s when it all started with us playing together and we’ve been best friends ever since.”

dUg has referred to Tommy as his “Musical Soulmate” and the two have been involved with playing, writing, recording, and jamming for years in various shows, jams, events and projects.

“Meeting dUg has been a huge blessing to all of our lives as a person, mentor, father figure, best friend, teacher, and music Encyclopedia. He showed me how to sing and use my voice.

He first had me play on the Jimi Hendrix tribute record he did, then he took me out on tour with him and Corey Glover (Living Colour) as a double headline. I sold merch for him and Corey and then on the encore of every single night I got up and played “Voodoo Child” with the both of them. It was amazing and surreal.”

After the tour ended, Tommy went back to LA with dUg, who asked him if he had any original music. This was the beginning of the “Phases” recording at Pinnick’s home studio. The music was recorded from the time Baldwin was 18 to 20 years old throughout different “phases” of his life. It took 5 years from start to finish to complete this record. “It’s been an amazing journey so far, but as everyone’s been telling me, it’s only just getting started.”

Baldwin’s new record label and publishing company is Broken Bottle Records, where he will have his upcoming releases, videos, and other projects.

Gun in Your Hand

Love Has No Shame

Not Much Time Let

Some #namm2019 experience with
One of my performances at Techra
Demoing my signature 5B carbon fiber drum sticks with,Tommy Baldwin(Guitar) Doug Pinnick (Bass/vocals).
Techra
JBL… https://t.co/CUfjdSyzX3