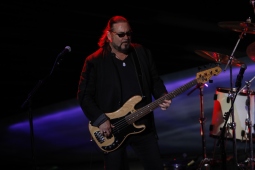 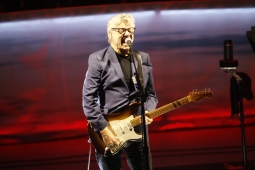 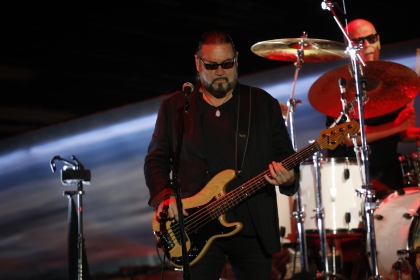 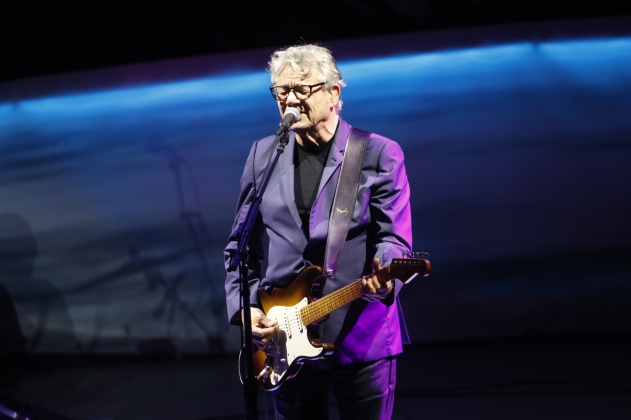 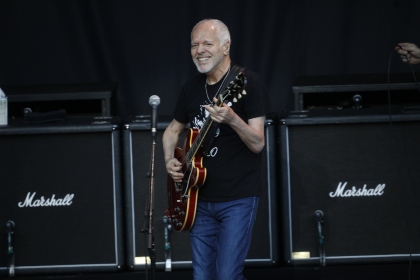 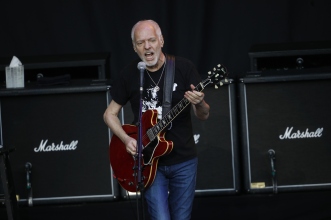 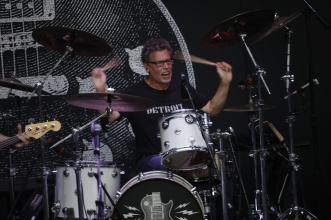 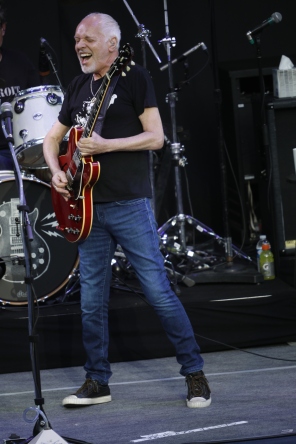 Photos and Review by Alex Kluft

Almost a year ago, I was at the Pacific Amphitheater at the OC Fair seeing guitar greats, Steve Miller and Peter Frampton. During the show, Miller told a story of how the two met 50 years ago during a recording session in London how their life-long friendship began. After five decades Miller and Frampton are back again for their second tour. This is the guitar event of the summer. On August 15th at the Santa Barbara Bowl Miller said how it’ll be 89 shows the two have played together by the end of the tour. This tour began June 12th in Indiana and has just seven shows left.

Before Frampton took the stage a pre-recorded announcement from Frampton came on over the speakers stating photos and video would only be allowed in the first three songs of the show. Being a photographer, this rule was nothing new to me, however this applied to the whole audience. Frampton has even stopped shows over fans recording video. For being a frequent concert goer, I praise Frampton for doing this since too many fans these days take photos and video through-out a show, aren’t present in the moment and don’t watch with their eyes directly, but on their phone screens. At 6:30pm Frampton took the stage which seemed quite early, but with the venue curfew, it was the only way to allow for full sets from both acts. Of the 5+ times I’ve seen Frampton live, I’m always amazed by his guitar playing, not just his hit songs.

Frampton started his set with Something’s Happening. Not only did Frampton play great songs, he always shared stories on writing the songs. Frampton’s set also included a special tribute to Soundgarden’s Chris Cornell, by playing their song Black Hole Sun, which has been in his setlist for a number of years now, but with Cornell’s passing last year Cornell’s image appears on the curtain behind the stage. Before dedicating the song to Cornell and his family, Frampton praised the Queen of Soul, Aretha Franklin who passed away just the next morning after this show.

Frampton’s second to last song was one of his biggest hits Baby, I Love You Way, which he told the full story of how the song came to be starting with him and Alvin Lee (10 Years After) in the Caribbean Islands. The last song of his set was Do You Feel Like We Do. Frampton didn’t play just any guitar for the last song, it was the black Gibson Les Paul seen on the album cover of Frampton Comes Alive. I happened to have a personal connection since I was at the Chicago Theatre for the 35th Anniversary of that historic album when Frampton played the guitar for the first time live since he was reunited with after it went missing in a plane crash decades earlier. This song wouldn’t be complete without its famous talk box solo which always leads to Frampton and the audience laughing. Although Frampton’s set was over, the audience enjoyed him again with an appearance during Steve Miller’s set.

Steve Miller took the stage around 8:30 P.M. I’ve had the honor of seeing Miller in concert several times in the past 10 years. As usual, Miller’s set was filled with unforgettable guitar solos and legendary stories. I would describe Miller as both a guitar genius and wizard with the unique sounds that he produces. Just like Frampton, in Miller’s career spanning over five decades he recorded many great albums as a writer, singer, and guitarist. Both artists were heavily influenced by the Blues as well. Miller opened his set with “The Stake” off his album Book of Dreams, which celebrated its 40thanniversary last year.

The simple way to sum up Miller’s set would be as a sing-along as he played one hit after the next with songs like “Abracadabra,” “Living in the U.S.A.” and “Swingtown.” Almost half way into Miller’s set, Frampton joined in to pay tribute to their idols Elmore James and Freddie King. Seeing two guitar giants on the same bill wouldn’t be complete without the two trading off unforgettable guitar solos. Like Frampton, Miller shared stories behind his songs and told my personal favorite of how he bought his Electric Sitar guitar which was used on “Wild Mountain Honey.” Miller told the story of how he went into Manny’s Music in NYC to buy a Gibson Les Paul, but only had $250. As Miller was walking out he noticed a barrel of guitars saying “Your Choice $150,” and pulled out the Electric Sitar based on it’s neck before seeing what a unique guitar it is. Miller broke down all the fine details from the lipstick tube pickups to mirrors on the back and how George Harrison playing sitar with Ravi Shankar helped him decide in purchasing it. Miller also went on to share how a guitar collector offered to buy the guitar for $250,000 and the Smithsonian Museum wanted to borrow the guitar for a special exhibit.

Rather than leaving the stage and coming back for the encore, to not waste precious time as curfew was approaching, Miller and his band continued to play. Unfortunately to be finished by 10 P.M. Miller had to cut “Jungle Love,” but played the “The Joker,” and ended with his usual closer “Threshold/Jet Airliner.” The tour ends with two nights in Woodinville, WA on August 25th and 26th at the Chateau Ste Michelle.